How Masai Ujiri Builds a Team

Masai Ujiri turned a losing team into an NBA Championship team as the president of the Toronto Raptors. His leadership is lauded on and off the court, as he’s also the founder of Giants of Africa, a charity organization that urges African youth to “dream big”, using basketball as a tool to educate and enrich their lives.

Masai came to Toronto in 2013 after being named the NBA’s Executive of the Year as the general manager of the Denver Nuggets. He had a somewhat controversial start, beginning his reign by trading some fan-favourite all-stars. These drastic moves ultimately led the Raptors to the franchise’s only championship, and Toronto erupted with cheers when Masai re-signed with the team and expanded his role from president to vice-chairman.

The New Yorker recently interviewed Masai to learn more about his leadership style and how he builds a team.

Growing up in Nigeria, where soccer was king, how did you end up playing basketball?

I started playing soccer. There, it’s soccer right away — outside, kicking a tennis ball, kicking anything that’s round. We used to go play soccer on the primary-school pitch, and we had to walk across the university to get to my primary school. We’d have to walk through the basketball courts to get to where we played soccer, and we’d always use the soccer ball to shoot hoops. Then we’d do it every day. It started taking longer and longer. It became less soccer and more basketball, and we started looking for a basketball. I started asking my mom for a basketball, for basketball shoes. We’d go to play early in the afternoon, because in the evening the university players, the better players, came to play. I think I was between eleven and twelve. I met Oliver Johnson, an American who was coaching at the university. He started doing little camps here and there.

When I watch the games at the arena, I sit in a room with our video guys. I don’t sit down in the main bowl. Even the attendants that work with us, I just wanted to give them the biggest hugs. All of these guys, they’ve become a part of your life. You want to hug them.

Tampa was great — they were great to us. But, no, thank you. All due respect. Couldn’t ask for anything better from how people treated us, but there’s nothing like home. To feel our arena, its feel, smell, everything — we could play a million games and win how many, lose how many, it doesn’t matter. Just to come back and feel that meant the whole world to us.

Is that true for your players, too? You are a Canadian citizen, but some of them probably liked the Florida weather more.

Was that a surprise, and did it impact, from your perspective, the play on the court?

Yes. We don’t use it as an excuse, but there’s just so many things that you don’t even think of when you have to resettle or relocate or be displaced, however you want to put it. I’ll give you an example. You go and play in Tampa — it’s not a basketball city, you know? You’re not getting Raptors fans or Canadians. It’s usually your road fans. All of these people are interested in coming to the game to see their favorite team, or they’re coming to see their favorite star. There’s basically no home-court advantage.

I remember one particular game. We’re playing, and we were up on Boston — I think it was, like, 29–13 in the first quarter. Then all of a sudden the crowd just starts cheering for Boston to come back. And all the players are looking, like, What’s going on here? It just didn’t sit right. Would that ever happen in Toronto? Never.

Maybe it’s wrong for me to think that way. But if you start to think about all the other things… During covid, you’re not in your home. Now you think of your staff: Can they afford to bring their families to Tampa? Somebody’s family is back home. The wife is not there, or the husband is not there, to help in these times, like, with homeschooling. Usually your kids are at school, you know? So, all those little things, it became so much. For people like myself, we can manage. But some of these guys are rookies on our team. They had never even been to Canada.

How has it felt now that the season is back? You just had a tough loss against the Bulls.

I think we have — how many guys are twenty, twenty-two years old? Precious Achiuwa is twenty-two. Scottie Barnes is twenty. It’s a young team. We expect this. This is the growth and building path we have to take. It’s a little bit different from where we’ve been. I think moving to Florida set us back a little bit — I told ownership that it set us back a couple of years. But we’ll build this young team. We’re happy with the talent.

The N.B.A. is a players’ league, and player empowerment is a huge theme of the last five to ten years. Have the dynamics changed a lot since you were at the Nuggets? Now there are these big, public trade demands.

In my opinion, the toughest situations that we all have to deal with are when a player leaves an organization, and when a player is traded. You build a culture where you try to be as honest as you possibly can, and treat these players in the best possible way. If you can treat these players with respect, and you develop relationships with them, then it makes it a little bit — not easier, but at least you can feel, in your heart, you have communicated.

What was it like watching DeMar DeRozan come back, playing for the Bulls, and being a big part of why they won?

DeMar is an incredible player. We just reached a point where we’d done the same thing for a long time. It’s in admiration. A lot of my guys are with the Bulls. Marc Eversley is the G.M. There are a lot of people I’ve been close to. I look at it — I admire it in many ways.

Are there decisions you regret — moves you’ve made that, if you could go back, you would do differently?

All of us make mistakes. You’re going to have a draft pick and pick the wrong guy. What’s one decision that I’ve made? I’ve made a lot of bad decisions.

Do you have a follow-up process, in order to avoid repeating mistakes that you make?

Tell me your secrets.

I’m not going to tell you our secrets. But in our town hall, when we were talking about our identity, when we chose the words, a lot of the words that came out were different. This league is a copycat league, and, honestly, we take pride in not being that. I don’t have to do what other teams are doing.

We’re going to do things differently. I take pride in that.

Now in his seventh season as president of the Toronto Raptors, Masai Ujiri has led the team through its most successful period on the franchise history. As a public speaker, he shares insight into leadership, social justice, building strong business cultures, and more. 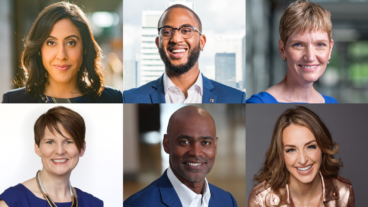