One of Time magazine’s “2021 Next Generational Leaders”, Dr. Chika Stacy Oriuwa is a medical trailblazer spearheading change in healthcare and beyond. She is an accomplished physician, spoken word poet, and advocate for racialized and marginalized populations. Oriuwa draws on her personal and professional experience to share insight and actionable strategies into transformative leadership, mental health and wellness, and igniting change to build a more equitable future for all.

Currently a resident doctor in psychiatry at the University of Toronto (U of T), Oriuwa is a graduate of the University’s Faculty of Medicine. When she arrived as an incoming medical student to find she was the only Black student in her cohort, she channeled this disappointment into action, becoming a vocal advocate for improving disparities in Black health and confronting institutional discrimination.

Since then, Oriuwa has become the first Black woman to be named sole valedictorian of the department and has spoken at numerous national and international events on the topics of DEI, leadership, mental health, and her journey as an underrepresented minority in medicine. Oriuwa was also an ambassador and educator of U of T’s Black Student Application Program, where she saw the faculty admit the largest group of Black medical students in Canadian history.

In addition, Oriuwa is a professional spoken word artist. Working under the Hamilton Youth Poets, she has earned her place as a national slam poetry finalist twice. In 2017, she released her renowned slam poem “Woman, Black” and in 2018 published her seminal article In My White Coat, I am More Black than Ever for FLARE magazine’s Black History Month campaign. She has also been featured on CBC’s The National, CTV News, CP24, Toronto Star, Time magazine, and TODAY, amongst others. She is slated to release her first memoir with HarperCollins in 2023.

A recipient of numerous prestigious awards and honours, Oriuwa was named on Maclean’s Power 50 List in 2022 and was recognized as one of Best Health Magazine‘s “2020 Women of the Year”. She was also recently honoured in Mattel’s #ThankYouHeroes campaign alongside five other women with a one-of-a-kind Barbie doll made in her image to commemorate her contributions as a frontline healthcare worker.

In addition to her medical degree, Oriuwa has a master’s degree in Health Systems Leadership and Innovation from the University of Toronto. She also serves on Indigo’s board of directors, using her expertise to inform their efforts in advancing equity and curating spaces of wellness and inclusion.

Empower Your Teams Through Authentic Leadership

The pandemic caused cataclysmic shifts in the way we work on a systematic and individual level, demanding a new kind of leadership to meet the needs of a changed workforce.

Named one of Time magazine’s “2021 Next Generational Leaders” and one of Maclean’s 2022 Power 50, Dr. Chika Stacy Oriuwa explores the transformative leadership needed to succeed in today’s new world of work. She draws on her experience working in the medical/psychiatric emergency department during the height of the pandemic as well as her efforts in spearheading DEI initiatives in healthcare and beyond.

Through sharing her journey to becoming a medical trailblazer, Oriuwa provides audiences with a leadership roadmap for today’s new world of work. She shares lessons learned on leading change, navigating risk, and fostering a culture that empowers and engages today’s diverse workforce by embracing vulnerability and authenticity.

Dr. Chika Stacy Oriuwa arrived at the University of Toronto as an incoming medical student to find she was the only Black student in her entire cohort. She channeled this disappointment into action, becoming a vocal advocate for improving disparities in Black health and confronting institutional discrimination.

Through her advocacy efforts, Oriuwa catalyzed a movement that rippled throughout the University and led to a more equitable admissions process. In 2020, as an ambassador for the University of Toronto’s Black Student Application Program, she saw the University admit the largest group of Black medical students in Canadian history.

Oriuwa draws on her experiences spearheading DEI initiatives to leave audiences with a prescription for advocacy that outlines actionable strategies for building equitable workplaces. She’ll explore how to spot and stop subtle discrimination, enact effective anti-racist policies, and become better allies for the BIPOC community within the workplace and beyond.

The pandemic was a destabilizing experience for all, raising awareness of the need for better mental health and wellness supports not only within our communities but within our workspaces as well.

Dr. Chika Stacy Oriuwa is currently a resident doctor in psychiatry and serves on Indigo’s board of directors, where she advises on their efforts in advancing equity and curating spaces of wellness and inclusion. She draws on her lived experience as well as her medical and professional expertise to provide effective strategies for supporting mental health and wellness, on a personal and organizational level.

Audiences will leave with actionable strategies to better support themselves and those around them, and with a greater understanding of the interconnection between mental health and racialized communities.

As the only Black woman (and student) in her cohort at the University of Toronto’s Faculty of Medicine, Dr. Chika Stacy Oriuwa questioned if she belonged there. She knew she was walking into a boy’s club, as well as an institution riddled with systemic racism.

Oriuwa made a decision — if she was going to dare to occupy powerful spaces, she was going to do so unapologetically. She learned how to lean into authenticity to enable her to not only exist but lead in spaces that initially terrified her.

Today, she is a resident doctor in psychiatry; serves on Indigo’s board of directors, advising them on their efforts in advancing equity and curating spaces of wellness and inclusion; and has been named one of Time magazine’s “2021 Next Generational Leaders”. Mattel also honoured Oriuwa with a one-of-a-kind Barbie doll made in her image to commemorate her contributions as a frontline healthcare worker.

Oriuwa walks audiences through her journey to becoming a medical trailblazer to share lessons learned on leadership, navigating personal and professional risk, and finding courage through adversity.

Diversity in Medicine: The Evolution of a Black Female Doctor and Advocate

There is a disparity in healthcare, one that Dr. Chika Stacy Oriuwa experienced firsthand as the only Black medical student in her cohort at the University of Toronto’s Faculty of Medicine. She became an ambassador and educator for the University’s Black Student Application Program, but in accepting this role, she was warned of the risks this posed to her career and was quick to learn and experience the darker side of advocacy.

In this eye-opening keynote, Oriuwa shares her evolution as an advocate for diversity and inclusion in medicine. She will explore how she navigated personal and professional risk to challenge the status quo and enact positive change; the historic barriers she went head-to-head with; the important role diversity plays in healthcare and beyond; and how we can all become effective allies for the Black community. 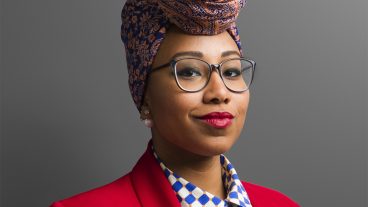 Thank you for all of your support leading up to today’s event, and please extend our deepest gratitude to Dr. Chika – what an exceptional keynote presentation. Her story, her work, her knowledge and expertise is so powerful and inspiring. She had an incredible impact on our audience, and we appreciate the time she took to spend with us today to share it with our community. Thank you again!

Thank you so much for your incredible keynote! Our guests were riveted to your keynote and LOVED the poem!