A Funny Way for Students to Get Savvy About Money

Say the words “financial planning” to a roomful of high school students and most eyes are likely to glaze over. Most, that is, except perhaps for some who have had their eyes opened by “Funny Money,” a witty, one-hour presentation about personal finance geared specifically to their age group.

It’s done with a light, street-smart touch: For example, Mr. Cunningham asks his audience how much they think they’ll need to spend on school supplies in a year: “The lowest amount I ever heard was $23,” he tells them. “The student was quite adamant about it: ‘$23, sir; I have a plan.’

Claire Wheeler, who turns 19 this month, is starting her second year at the University of Toronto. She said that watching “Funny Money” during her final year of high school helped her understand compound interest, and she began putting money monthly into a tax-free savings account and a registered retirement savings plan.

“If you start saving for your retirement fund when you’re 18, the amount you have saved by 60 is staggering,” Ms. Wheeler said. “Hopefully, I’m on my way.” 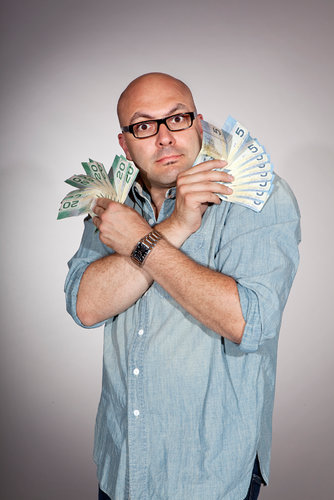 James Cunningham has delivered his ‘‘Funny Money’’ presentation to more than 500,000 students in
Canada and the United States.

“Those three things are repeated throughout,” said Emer O’Flynn-Wheeler, a high school vice principal and former program coordinator for the Toronto District School Board. “They learn how to ‘know their flow, control what they owe and invest some dough.”’

“At a certain developmental age, you pay more attention to certain concepts,” Ms. O’Flynn-Wheeler continued. “James does it in such a fun way that it’s quite remarkable. There’s nothing like being in a room with 600 teens who eat it up. It’s a concrete lesson done in an absolutely magical way.”

Mr. Cunningham says he has always been drawn to finance — he began investing in the stock market during his high school years. As the son of an entrepreneur, he realized at an early age that his family’s finances rose and fell with his father’s successes and failures: “I knew I needed a sound financial plan,” he said in an interview.

Drawn to comedy, he started his career on the college and university circuit, telling starving student jokes. “They were a huge hit because all students are broke,” he said. Students “would come up to me afterward, and I would draw up a financial plan for them on cocktail napkins and give them my e-mail address.”

He soon realized there was a huge deficit of knowledge about personal finance among college students, and in 1999, “Funny Money” was born. Mr. Cunningham began offering the program at colleges during orientation week.

“People came in expecting a boring lecture and were surprised that it was so funny,” he said. “It started to get legs.”

Its popularity led to a pilot version geared toward precollege students. In 2005, the Investor Education Fund, a nonprofit advisory service founded by the Ontario Securities Commission, agreed to sponsor the program in high schools in Ontario. From there, it spread: To date, it has played to more than 500,000 students across Canada and the United States while thousands more have watched online video cartoons based on the show.

This year alone, it will play at 250 venues, but Mr. Cunningham says it’s a gig he never gets bored with.

“If I weren’t a comic, I’d be a teacher,” he said. “I admire the profession. It keeps you young. When you really connect with the crowd, there’s nothing like it. The kids are great.”