Rick Hansen is a Canadian icon who has dedicated his life to creating a world that is accessible and inclusive for all. Best known as the “Man In Motion” for undertaking an epic two-year circumnavigation around the world in his wheelchair, Rick is also a four-time world champion, nine-time Pan Am gold medalist, and three-time Paralympic gold medalist. Now the CEO of the Rick Hansen Foundation, an organization committed to creating a world without barriers for people with disabilities, Rick uses his presentations to challenge everyone to become a difference maker and a legacy leaver. Now, 30 years after the Man in Motion tour began, Rick travelled back to St. John’s to see where it all started:

He’s a little bit older and greyer, but Rick Hansen is still fit and bubbling with the energy displayed 30 years ago, when he brought his Man in Motion tour to St. John’s on Aug. 26, 1986.

Hansen returned to the city Friday to mark the 30th anniversary of that event.

Man in Motion was a historic tour that saw him travel via wheelchair 40,000 kilometres through 34 countries, all on a mission to prove the potential of people with disabilities.

“It was the beginning of a really big new awakening for Canadians, that this is a big deal and we need to pay attention to it,” Hansen told CBC Radio’s St. John’s Morning Show.

His memories 30 years ago are of a “very inaccessible” city, whether it was the St. John’s International Airport, public transit or hotels.

But Hansen said St. John’s, like the rest of Canada, has made leaps and bounds since then.

“We’ve had some amazing transformation in attitudes and acceptance and levels of inclusion,” he said.

“The biggest changes are, attitudes are starting to evolve. People are starting to accept that people with disabilities have potential and they should be a mainstream part of society.”

However, Hansen said the work to continue to improve the lives of people with disabilities is far from over.

He cited statistics that people with disabilities form the largest minority group in the country, with well more than four million Canadians.

“People constantly underestimate the prevalence of disability. They don’t realize it,” he said, adding that the myriad of forms of disability contributes to that overall invisibility. 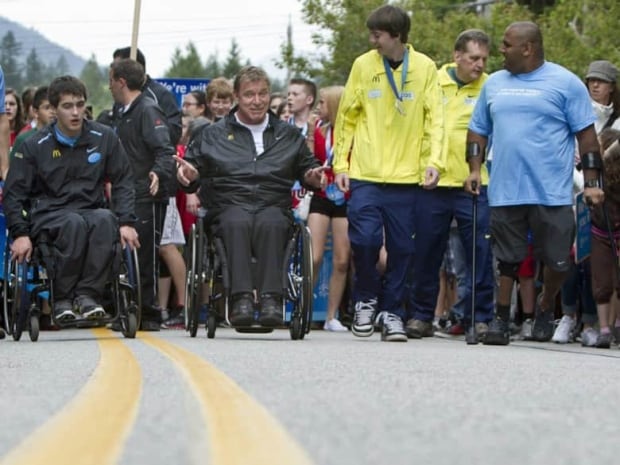 Rick Hansen, centre, climbs a steep portion of highway near Coquitlam, B.C., as part of the 25th anniversary of the Man in Motion World Tour. (Jonathan Hayward/Canadian Press)

“We have to move from accessibility into inclusion, which means people can get into a building, but be part of a building. They can work, be customers, and that’s the next generation,” he said.

“We have to keep removing barriers from places where people live, work and play, so people can be a full part of society. So we’re asking people to identify barriers and then bust them down.”