March 2016 marked five years since the start of the Syrian Civil War, a conflict that has forced over 4.6 million Syrians to flee their homes and seek refuge elsewhere. After five years, many of them are still living in camps across the Middle East and Europe.

After reading up on the news and statistics regarding the refugee crisis, Zach Ingrasci and Chris Temple, directors and producers of the award-winning documentary Living on One Dollar (available on Netflix), headed to Jordan to document the camps. The subsequent documentary, Salam Neighbor, will be screened on April 21st at the Roxie Theater in San Francisco.

Salam Neighbor follows Ingrasci and Temple as they spend one month living among 85,000 Syrian refugees in Za’tari refugee camp in Jordan. While there, the directors tried to understand the meaning of being a refugee by talking to their neighbors every day and recording their life stories.

We sat down with the filmmakers to talk about the film, the refugee crisis, and how anyone can take action to help. 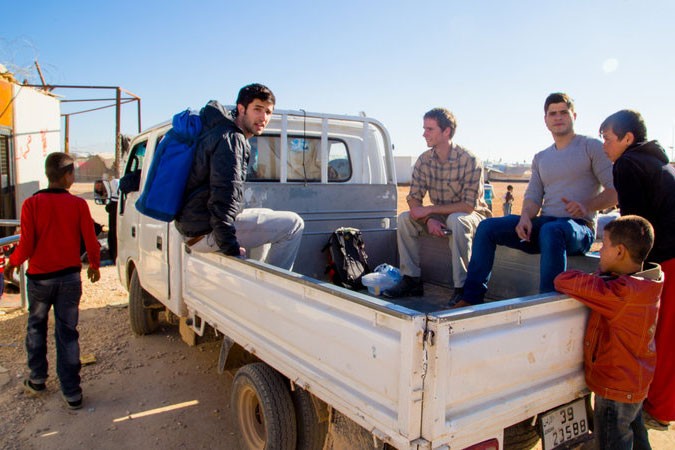 (American filmmakers Zach Ingrasci, left, and Chris Temple, in plaid shirt, received permission from the United Nations to spend a month with Syrian refugees at the Zaatari camp in Jordan; photo courtesy of 1001 Media/Living On One)

What inspired you to make the film?

Zach: The inspiration for the project came when Chris and I met Salam Darwaza and Mohab Khattab, founders of 1001 Media, in a café in Manhattan Beach. Salam’s parents are Palestinian refugees and she explained to us the meaning of being a refugee. Most of the information we receive about refugees comes from the media, but her words completely changed our prospective. We needed a more immersive experience, we wanted to go there and have time to connect and talk to them. We didn’t want to replicate the experience of a refugee, of course, but we wanted to understand.

How did you get there?

Zach: For the movie we worked with Save the Children, UNHCR, The United Nations Refugee agency, International Rescue Committee, and Salam’s contacts within the Jordan government.

What were you looking for?

Zach: We wanted to put a human face on all the bad news and statistics we kept reading. The film is comprised of five stories: Ismael, 27, was studying French to become a teacher in Damascus before he was forced to leave his country. He had to leave at night without making any sound. When he crossed the border he was leaving behind not just his past but also his future. The feeling of these people who are living in a camp is that their lives have been put on hold.

Was it difficult to establish a relationship with them?

Chris: On our very first day we met Raouf, 10, the main character of the film. We were setting up our tent and were very nervous. He came out of his tent next to ours and helped us. After that he slowly became our informal guide and our connection to the community.

Was it difficult to interview the subjects?

Chris: The most difficult storyline to build was the one about two women, Um Ali and Ghousson. As men, it was complicated to approach women and speak to them, but we wanted to make sure that their voices were heard. So our producer, Salam, was our connection and our female translator. The key, with them and with everyone in general, was to build a relationship based on trust. The film is talking about their stories and without that trust it was impossible to realize it.

What is the main problem refugees are facing now, besides food and common needs?

Chris: When they left Syria they thought they were going to be outside of their country for a month or maybe two, but it’s already been five years and nothing has changed. Even the international organizations thought it was a short humanitarian project for which they had to provide food, shelters, and blankets only. They need more. Raouf has been out of school now for 3 years. His school in Syria was bombed and he’s afraid to go inside another school. When you’re there you realize that it’s not just about providing the basic necessities, it’s also about how to help them deal with the situation, how to help kids with psycho-social support, or how to help Ismail to get a job and be productive again.

How are they dealing with their conditions?

Zach: They are so resilient and when given an opportunity to restart their lives they jump on it. They have incredible skills and contagious energies. The sad part is that there is a lack of opportunities.

Who do you hope the film accomplishes?

Zach: The hardest part for us was leaving, while all our friends at the camp were still there. We felt immediately guilty, and the best way to kill the guilt was to take action. That’s really what this film is about. Advocacy is the key to this project. The screening allows us to talk about the problem and to engage people and make them sign petitions related to education and funding. By clicking on “take action” on our website, you can find 5 to 6 local organizations where you can volunteer to help and welcome refugees in your community. We want to make sure they are received with dignity.

Do you think that many refugees still want to go home?

Chris: We have spoken with hundreds of kids and families and the first thing they say is that they want to go home. Um Ali, this incredible woman, told us that she can’t wait to go home to sit under the jasmine tree she has in her backyard with her family and neighbors.

Zach: We are still talking to them. We are friends on Facebook and we use WhatsApp to communicate with them. We went back last December to show the film before the launch. We wanted to make sure that they liked the movie and that they were feeling comfortable. We also wanted some updates. We saw that there weren’t many changes. The campus is still there but Raouf went back to school.

Did you ever feel threatened while filming?

Chris: The conversation around Syrian refugees and the Middle East is usually fear-based. We spent a month there and we have never felt threatened or in danger. This experience changed our perception of their world, and we hope that it will change other people’s minds too. This movie gives just a glimpse into the refugee’s world.

Zach: In one of the final scenes, we’re seated in a tent all together, and someone asked us, “Do you see us as terrorists?” And of course the answer was no.