Michel Chikwanine has overcome unimaginable pain and struggles. Born in the Democratic Republic of Congo, Michel grew up amid the terror of the Great War of Africa. He witnessed the torture of his father, the rape of his mother, and endured torture of his own. Much of his childhood was ravaged by the death and decay of a war that claimed the lives of 5.8 million people, his father included, and forced him to be a child soldier. Michel now inspires people to believe in their ability to make a difference and leaves audiences with a new perspective on life, a sense of hope through social responsibility, and a desire for change. Michel’s book, Child Soldier: When Boys and Girls are Used in War, is a book that takes young readers through his personal story. It was recently released and Michel sat down with Shad from CBC Radio’s Q to talk about the book. Read more below and listen to their conversation here.

As the Syrian migrant crisis continues to make headlines, wrenching stories and heartbreaking images are awakening the world to the plight of millions of refugee families. Daily, it seems, more and more people are asking: how can this be happening? What can I do?

And for parents and guardians, another difficult question arises: How can I explain this to my children?

The costs of war and the needs of refugees are not abstract concepts to speaker, activist, and author Michel Chikwanine.  At the age of five, while celebrating a goal in an after-school game of soccer, Chikwanine was kidnapped by rebel fighters in the Democratic Republic of Congo.

He eventually managed to escape, but not before he was subjected to some truly horrific experiences.

He recounts his story in a graphic-novel-style book called Child Soldier: When Boys and Girls are Used in War, which he co-wrote with Jessica Dee Humphries. The book is illustrated by Claudia Davila, and it’s aimed at 10 to 14-year-old readers. 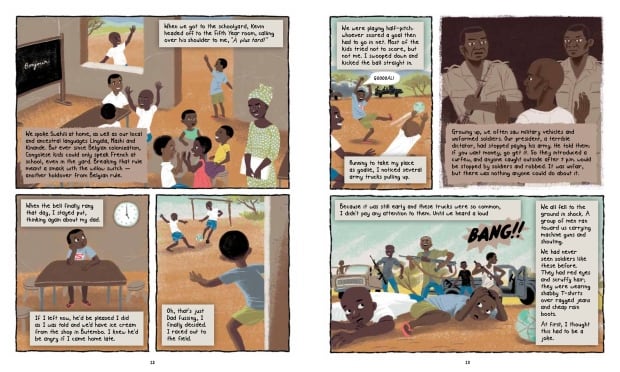 In an interview with q host Shadrach Kabango, Chikwanine was asked if he thinks this is a book that children can handle.

“Claudia did an incredible job, of really making sure that while the violence is there, it’s not as graphic and as shocking for the audience.  I wanted to make sure this book was accessible to that age range because I think they’re such an important group to understand what is happening in the world.”

He adds, “Young people have to understand the complexities of what’s happening in the world. We can’t hide it from them — because whether we like it or not, it’s happening to 5 year olds in the Congo, in South America, in the Middle East and there are gangs here [in Canada] as well.”

Chikwanine’s ordeal involved being verbally and physically assaulted, being cut and having cocaine and gunpowder rubbed into his wound, and being forced to kill another boy — all at the age of just five years. Chikwanine still struggles with guilt and nightmares.

“They blindfolded me; they dropped an AK-47 into my hand, and the rebel commander was yelling in my ears and I could hear him loudly screaming ‘Shoot!’. And they kept yelling louder and louder to shoot, so I pulled the trigger … and this is when the rebels took off the blindfold … and I looked a few feet in front of me and my best friend Kevin was lying there in a pool of his own blood.” 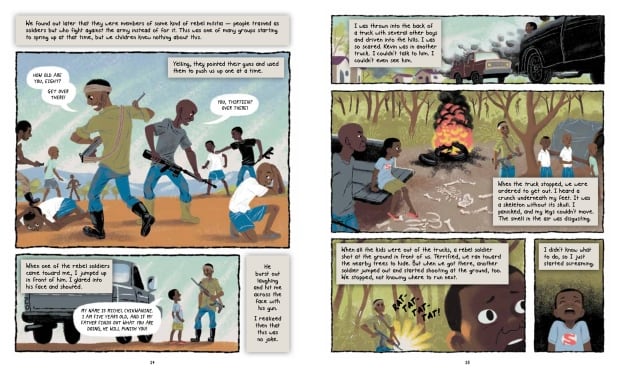 After two weeks, he managed to run away. Chikwanine says that as horrible as the rebel training camp was, it was fear of his father that drove him to escape.

His father, a human rights activist, was poisoned in 2001 as he tried to tell the world about war atrocities in the Congo.

“What I loved about him,” Chikwanine says, “is that he was this incredibly tall, big man, who was so humble, and so loving, and courageous, to stand up for everyone … I wanted to make sure that the lessons he taught me really came through.”

‘Citizens of the world … have to embrace refugees’

The book encourages children and parents to engage in conversations about how conflict takes its toll.  A refugee himself, Chikwanine has some important light to shed on the current crisis, and how Canadians might best respond.