Do you have what it takes to be successful in today’s competitive marketplace? Who better to advise eager entrepreneurs than Dianne Buckner, the host of CBC TV’s wildly popular program Dragons’ Den, where hungry entrepreneurs pitch for an investment from a panel of Canadian self-made multi-millionaires. Dianne takes audiences through the “entrepreneur’s journey,” from identifying niche markets, to the art of the pitch, to taking advantage of business trends—all while sharing entertaining backstage peaks into life in “The Den.” Below, Dianne examines the rise of online shopping as it relates to the upcoming holiday season:

Canadians of all ages will set new records shopping online this holiday season, according to a number of industry insiders.

Canadians are coming a bit late to the e-commerce party. In Britain close to 15 per cent of overall retail sale are made online. In the U.S. it’s nine per cent, according to Forrester Research. Canada is at six per cent.

But Canadians are taking their dollars to the keyboard and closing the gap. Within five years, the U.S. is forecast to be at 11 per cent; Canada at 10 per cent, Forrester Research said.

Canada Post expects to deliver 20 per cent more parcels related to e-commerce this November and December.

“The growth has been amazing,” says Rod Hart, Canada Post’s general manager of parcels and e-commerce. “And you also see that online shopping used to skew to an age category that was on the younger side. Now we see that right through to 60-plus, they’ve becoming more comfortable with it.”

Consumers aren’t entirely responsible for the slower pace of adoption here. Later adaptation to online trends by Canadian retailers has been a factor as well, according to the head of digital for Best Buy Canada.

“Forty per cent of Canadians are spending their dollars online with foreign retailers, and that’s because the selection is not here,” says Thierry Hay-Sabourin of Best Buy. “Retailers have not adopted e-commerce at the same pace as consumers.”

But the bandwagon is filling up now, according to internal studies done by Canada Post.

One million Canadian households started shopping online in the past eight months.

Close of half of those Canadians e-shoppers have purchased three or more items for delivery in just the past three months.

In the past there were two ways to shop: go to the store to buy, or go online and have your purchase delivered. In-store pickup is a mix of the two. Customers place an order online, and then visit the store to pick it up.

At first glance it doesn’t seem to make sense — what’s the point of going online if you’re going to end up making the trip to a store anyway?

“Convenience is the name of the game for consumers,” says Hay-Sabourin of Best Buy. He says customers save time, not needing to trudge through aisles in search of what they want, plus there’s no risk the item may not be available. 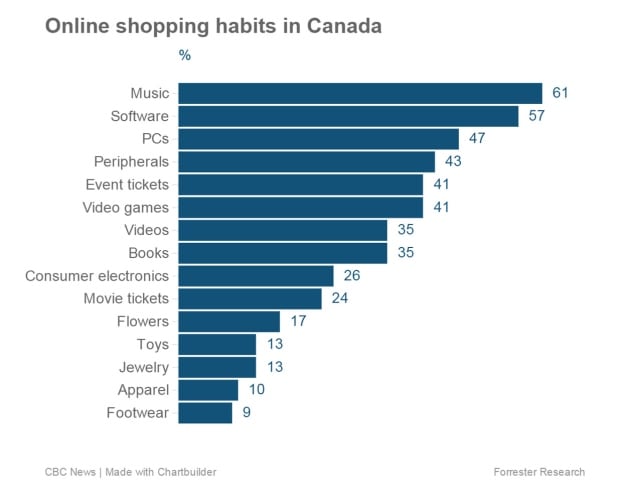 Customers who’ve reserve products online can show up as soon as 20 minutes after their online purchase, Best Buy promises, and even use use special parking and check-out counters.

The Bay intends to introduce an in-store pick-up system in the coming year. But it won’t be a reservation system.

“We tried it at Saks,” explains Michael Burgess, the president of The Bay’s e-commerce division. “It was not very effective, because a lot of customers would reserve but then not go in and buy. We’re going to do a buy online and pick up in store, so that customers have actually made the commitment.”

The use of mobile devices such as smartphones and tablets is going through the roof, both for product research and actual transactions.

“Mobile is such an incredibly pervasive technology that no one is going to ignore it,” says Michael LeBlanc, VP of digital for the Retail Council of Canada. He notes that in an internal survey, some retailers reported that a full 25 per cent of their online transactions are coming directly from a mobile device.

A growing number of retailers such as Mountain Equipment Co-op and Indigo have invested in software that can tell when a customer arrives at the website via a mobile device. They’ll then be directed to a site that’s been designed to be easily viewed on a smaller screen.

Retailers refer to the practice of making a far wider array of products available online, than in a physical store as “endless aisle.” Real estate is a lot cheaper in cyberspace. Wal-Mart, Sears, and Foot Locker are just a few that take this approach.

Some e-tailers are stretching beyond of their own traditional categories to sell goods you’d never find in their stores.

For example, pharmacy chain London Drugs is offering musical instruments and vacuums on its website, to name just a couple of surprising items.

These merchants have found that if a customer is satisfied with their e-commerce experience, they may be willing to buy an even wider selection of goods.

Despite the growth of e-commerce, parking lots and check-out lines will still be a nightmare this holiday season.

As dramatic as the growth of e-commerce may be, the reality is that the vast majority of holiday shoppers will still be doing it old-school, and taking a trip to the mall. Plenty of shoppers want to touch and feel the products they buy, and always will.

Then there are the shoppers who have no idea of what to buy, and need to meander through multiple stores in the hopes of spotting the perfect gift.

The burst of online sales that will occur after U.S. Thanksgiving on Cyber Monday, Dec. 1 (which will likely extend to be more of a Cyber Week if past indications hold true, says Canada Post’s Hart) will definitely pull some shoppers out of the stores. But not all, meaning most shoppers still spend time in a crowded, bricks and mortar store.