Happiness Expert | Bestselling Author of The Book of Awesome

A Harvard MBA, New York Times bestselling author, award-winning blogger, and one of the most popular TED speakers in the world, Neil Pasricha is “a pied piper of happiness” who dazzles audiences with ideas that skyrocket happiness into the stratosphere. With infectious enthusiasm, heartfelt authenticity, and a “what works” authority, Pasricha draws on the latest research in happiness to increase individual performance and create a more positive and productive workplace.

Pasricha spent a decade with Walmart, the world’s largest company, directly working for two CEOs and as the organization’s director of leadership development. He now travels all over the globe sharing messages on happiness to Fortune 500 companies, schools, and non-profits. His Ted Talk “The 3 A’s of Awesome” has been ranked as one of the most inspiring of all times with more than 3 million views. He has spoken to Royal Families in the Middle East, Ivy League Deans, and to CEOs at organizations such as Google, Audi, American Express, and GE.

His first book, The Book of Awesome, was a runaway #1 international bestseller with millions of copies sold. Since then, he has published seven bestsellers, including The Happiness Equation, a step-by-step guide to improving your time, career, relationships, and, of course, your happiness, as well as his most recent book, You Are Awesome, about changing the way we view failure and help us build resilience. His internationally acclaimed blog, 1000 Awesome Things, has scored over 50 million hits and twice won the Webby Award for “Best Blog in the World.”

Pasricha partnered with Harvard University to design one of the first global leadership development programs inside a Fortune 10 company. And, as a management consultant, he advised Fortune 50 companies on top level leadership strategies. He earned his Master’s degree from the Harvard Business School, focusing on Leadership and Organizational Behaviour.

Pasricha’s writing and work has been featured in Harvard Business Review, Forbes, CNN, BBC, The Guardian, The New Yorker, The Sunday Times, China Daily, The Jakarta Post, The Sydney Herald, and Wired.

The Subtle Art of Happiness

Why can so few people at work genuinely say, “I love my job”? Gallup reports 87% of the global workforce is disengaged. But what if there were subtle, secret weapons that could turn employees into their most powerful, engaged, and productive selves? It’s not crazy talk. It’s actually happening. Using his unique blend of counterintuitive research and sidesplitting stories, Neil illuminates a clear path forward into workplaces where people show up inspired, do great work, and leave with full minds and full hearts. Raw, hilarious, and heartwarming, this is the perfect keynote to kick off or close your conference with the ultimate high. Past clients include: Audi (national dealer teams), AstraZeneca (sales agents), and TD Bank (top global leaders).

The Science of Positive Growth Mindset

Does great work lead to happiness? Or… does happiness lead to great work? Neil Pasricha shares counterintuitive research-based answers in this fun, fast-paced, research-grounded tour of the emerging neuroscience and positive psychology landscape. He challenges your audience by asking: “Would you press a button and have 31% higher productivity, 37% higher sales, and 300% greater creativity on Monday morning?” When heads start nodding, he shows how to get there. Based on fresh research Pasricha published in Harvard Business Review together with the latest in neuroscience and positive psychology, this speech is not true motivation – it’s application. Perfect for left-brained, analytical, or even skeptical audiences. Past clients include: Google (engineers), Kaiser Permanente (physicians), Citigroup (investment bankers).

Be Happy First: Breakthrough Performance In Times Of Change

After Neil Pasricha’s wife left him and his best friend suddenly took his own life, he crash-landed in an empty downtown bachelor apartment. Just twelve months later, he was working directly for the CEO at Walmart, running the International Academy of Digital Arts and Science’s “Best Blog in the world” which was on its way to garnering over 50 million hits, and had just published The Book of Awesome which stormed the New York Times bestseller list and has now sold over a million copies. The lesson was clear: resilience, change, and growth can came from times of challenge. This inspiring talk is for anybody looking for simple practical ways to lift performance to new heights. In Neil’s case, he realized before life could change, he had to change. Leadership ultimately comes from within. When company execs would ask him “How did you get so happy?” he’d say the secret is to “Be happy first” and let the mindset you cultivate ultimately enable your success. Neil’s presentation leaves audiences with the tools they need to achieve their biggest goals. (Past clients include: Uber (marketing), Momenta (bioscience execs), University of Texas (students and faculty).

Lead Yourself First, Before You Lead Others

Which company is #1 on the Fortune 500 today and has been for more than a decade? Walmart. The retail behemoth’s rise to half a trillion dollars in sales with over two million employees spread across the globe has been well-documented. But what hasn’t been documented is how they develop, nurture, and grow leaders up through those ranks. Neil Pasricha served as Director of Leadership Development inside Walmart for the past ten years – working directly for two CEOs and partnering with Harvard Business School to develop the first global executive program inside the retail giant. Join him as he shares a window into what his research and work reveal about what truly makes leaders tick and walk away with clear takeaways on how they can drive you and your teams. How do you lead a team of two, two hundred thousand, or even two million people? It starts with yourself. Let Neil show you how.

According to the Edelman Trust Barometer, trust in media, business, and government are at an all-time low. We have never believed less, agreed less, or trusted less. Yet, building trust, and developing the community that surrounds it, remains imperative for any art project, online influencer, startup, or brand. So, what are the new ways to build trust and community online in an era of mistrust? What works? What doesn’t? And how do we figure out who to really believe and rally behind? Join New York Times bestselling author Neil Pasricha as he answers these questions.

Many organizations choose to have Neil add on a custom workshop to his keynote. These workshops can bring an organization purpose to life, embed a conference or session theme into company culture, or develop customized happiness challenges which individuals design and share with their peers in order to commit to the practice of happiness. Note: As workshops require additional interviews, pre-meetings, and time on-site, they are not always available. Please discuss options with your agent.

In an all-new virtual keynote, Neil Pasricha responds to the spiking anxiety, stress, and mental health challenges we’re all facing today in our new “normal”

The bestselling author of You Are Awesome: How to Navigate Change, Wrestle with Failure, and Live an Intentional Life, Pasricha will share three research-based practices to ground and centre yourself on a daily basis, as well as key phrases to use when speaking to yourself and loved ones during the pandemic. This session can include an optional Q&A to help participants connect with their peers while learning Pasricha’s empathetic tools, grounded in research and case studies.

Pasricha’s virtual event comes with a tailored “care package” available to each participant post-session. It includes:

This virtual presentation is 60-minutes long, including a Q&A. Length is flexible depending on a client’s needs. 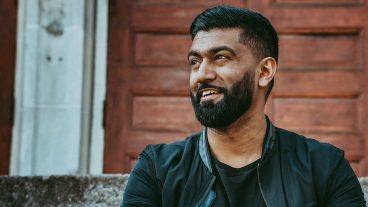 The Circle of Trust

So Many Things to be Happy About

How to be Happy

The Secret to Never Being Too Busy Again

You Are Awesome: How to Navigate Change, Wrestle with Failure, and Live an Intentional Life

We’re living in an era with highest-ever rates of longevity, education, and wealth. But there’s just one side eﬀect. We no longer have the tools to handle failure… or even perceived failure. What do we desperately need to learn? RESILIENCE. And we need to learn it fast. From Neil Pasricha comes a revelatory and inspiring book that will change the way we view failure and help us build resilience.

The Book of Awesome

Based on the award-winning blog 1000awesomethings.com, The Book of Awesome is a high five for humanity and a big celebration of life’s little moments and the underappreciated, simple things that make us happy, from popping bubble wrap to hitting a bunch of green lights in a row, to waking up thinking it’s Monday and realizing it’s Saturday. With wise, witty observations from writer Neil Pasricha, this treasure trove is filled with smile-inducing musings that make readers feel like kids looking at the world for the first time: AWESOME!

The Book of Even More Awesome

Neil Pasricha of 1000awesomethings.com presents a brand-new collection of things that make you go AWESOME!… Neil Pasricha: You Need to Take More Vacation and Here’s How To Do ItPosted July 17, 2019

Get Better at Public Speaking: Neil Pasricha’s Secrets to a Great SpeechPosted May 21, 2019 Thank you for an outstanding key note at our Marketing Excellence event and it was such a pleasure to meet you in person. The buzz after you left was how & when we could get you back to share your message with an even broader group. You clearly struck a chord with our audience; it is rare to find a speaker that can ignite such passion and unify the audience on a common theme that transcends generation and function. Please keep writing books.  Yours changed my life.

Neil is a rock star! He visited the Googleplex and you could hear a pin drop while he was speaking. Everybody loved his models for living happier lives. Many people commented that he was the best speaker we have had in some time!

Neil Pasricha was a 10/5. He knocked it out of the park! Neil was so humble and easy to work with. He is super engaging and had the audience glued to his discussion. I would recommend him to anyone. He is very gracious and stayed behind to sign books and connect with people.

Neil has such great energy and his positivity is incredible and infectious. We’ve held our event for years and thanks to Neil we had the best one so far. We have nothing but great things to say!

Very engaging, spoke from the heart, and really connected with everyone!

Great presentation, humorous, entertaining, thought provoking. Plus, he stayed at the book signing until he signed and visited with every single person. We really enjoyed him and his talk.

Success was defined yesterday by my engaged team and 200 smiling faces around the room. Neil captured us and inspired each of us to exit the room better people then when we walked in. Grateful.