Margaret Trudeau is a Canadian icon, celebrated both for her role in the public eye and as a respected mental-health issues advocate. From becoming a prime minister’s wife at a young age, to the loss of both her son and her former husband, to living with bipolar disorder, Trudeau tirelessly shares her personal stories to remind others of the importance of nurturing the body, mind, and spirit.

A bestselling author, Trudeau is the author of four books, including her Changing My Mind, which charts her life’s ups and downs, and her latest title, The Time of Your Life, which offers women an inspirational and practical approach to creating a healthy, happy, secure, and satisfying future.

Trudeau recently took her story to the stage, co-writing and starring in her own one-woman-show, A Woman of a Certain Age. Part exploration of mental illness and part tell-all, Trudeau shares her compelling story as one of the world’s most fascinating figures, chronicling her courageous public and private journeys. The show premiered on the renowned Second City stage in Chicago, and has since traveled to Montreal and Toronto as part of the Just for Laughs festival. It also made its New York off-Broadway debut with Audible Inc., the audio content division of Amazon, at the Minetta Lane Theatre. The live recording of this performance will be available via audible.ca in 2020.

Trudeau sits on the Executive Advisory Board of the UBC Mental Health Institute as a community advocate. She is also the former honorary president of WaterAid, a charitable Canadian non-governmental agency that helps communities in developing countries build sustainable water-supply and sanitation services.

Trudeau is the proud mother to Prime Minister Justin Trudeau.

Canadian Icon Margaret Trudeau offers audiences an inspirational and practical approach to choosing a healthy, happy, and secure future. Using stories from her own life, as well as those of others, Margaret–with the remarkable empathy and warmth she’s known for–brings attention to what people need to make their later years meaningful and fulfilling.

Canadians fell in love with Pierre Elliott Trudeau’s beautiful bride when he brought her to the world stage as the youngest First Lady in the history of the country. Yet, as time went by, Margaret was unprepared for public life, and plagued by mood swings. After three sons with Pierre, the marriage ended. She then remarried and had two more children. But the tragic loss of her son, Michel, in a skiing accident and the passing of Pierre Trudeau a few years later, were too much to bear, and she became severely ill.

Today, Margaret has rebuilt her life once again. Now, she brings her formidable life story to the stage in her quest to help others, sharing her message of resilience with the goal of helping to inspire others and to erase the stigma surrounding mental health issues. The National: Interview with Wendy Mesley 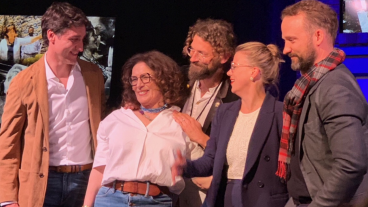 Margaret Trudeau Stars in One-Woman Show in ChicagoPosted May 7, 2019 Margaret Trudeau’s presentation was wonderful. She inspired a standing ovation from a sold out audience in the historic Regent Theatre.  Her talk was moving, funny, and very personal. She spoke eloquently for an hour, signed book autographs afterwards,  and talked about her cause during the reception that followed. The Dean felt she served as an important role model for our Faculty and its unique goals. We were very, very glad to have her.

University of Ontario Institute of Technology

Our event was a huge success.  Our guests really enjoyed Margaret’s presentation as she was charming, entertaining, and honest.  She was very accommodating in her time spent with our guests.

I would recommend her to other organizations.

Margaret’s presentations were amazing. She was so honest and inspiring and gave suggestions for people to get the help they need. She had standing ovations at both events. She took the time to meet with people and listen to their stories during the book signing. She was very open, warm and genuine. Very personable. Very real. People were moved emotionally. Thank you for everything.

Margaret was an amazing speaker and our sold-out audience is still talking about how inspirational Margaret was. She truly showed courage by sharing her story with us and we deeply appreciate her candor.

She far exceeded our hopes with her very genuine presentation of her personal struggles and perspectives on Mental Health issues. Margaret personified our principles as a Peer Support Network, as she clearly presented her own honest perspectives of her own experiences. Her speech resonated with the entire room of attendees, but most particularly with our Staff, Board Members and Service users. I cannot say enough about the extremely positive feedback we have received, nor about how many lives she touched during the day she spent with us.

Your message was one of hope and gave heartfelt insight into anyone with mental illness. We loved listening to your stories about your life’s journey.